The semiconductor industry is being hit hard. Proof is piling up that consumers are slowing their spend on electronics (after two years of a spending spree on work-from-home updates). A possible recession is also weighing on investor sentiment, casting doubt on the sustainability of business spending on tech hardware. High-flyers Nvidia (NVDA -0.13%) and AMD (AMD 0.06%) are being hit particularly hard, with each down 51% and 49%, respectively, through the first half of 2022.

Nicholas Rossolillo (Applied Materials): Shares of Applied Materials were sinking like a stone in sympathy with Nvidia and other chip stocks to kick off the month of July. Why? Thank Micron Technology (MU 0.69%), manufacturer of basic commodity memory chips that are used in everything from graphics cards to tablets to cloud-computing servers. Micron cited slowing consumer demand for some devices when it issued weaker-than-expected guidance for its summer quarter.

Applied Materials is a top provider of equipment to the memory chip industry, so it’s been particularly sensitive to all the talk about economic slowdown and possible recession. Nevertheless, this flies in the face of Applied and its peers who have been saying there’s strong demand for fab equipment well into 2023 and beyond. The global chip shortage has exposed inadequate capacity to manufacture basic tech components, and Applied should be able to steadily grow for the next few years as it supplies the heavy equipment needed to produce memory and other pieces of circuitry.

Granted, supply chain issues have put limits on how much equipment can be assembled and shipped in recent quarters. During its fiscal 2022 second quarter (the three months ended May 1, 2022), Applied reported year-over-year sales growth of just 12%. However, since help in increasing manufacturing capacity isn’t going away, any delayed shipments would just be pushed back into 2023. Either way, Applied has a big backlog of demand for its products and services.

That’s why I think Applied Materials is an awesome deal at less than 15 times trailing-12-month free cash flow. It’s a dividend stock, and the company also repurchases lots of shares during periods of decline like right now to boost returns. If you ask me, this is a top way to supplement any existing chip stocks in your portfolio with a long-term market outperformer.

Billy Duberstein (NXP Semiconductors): Semiconductor downturns are usually scary as chips are known to be economically sensitive and prone to booms and busts. While we were in a boom to start 2022, it looks as though we are about to go through a downturn of some kind.

However, over the long term, investors get rewarded for that volatility. Over the past 10 years, which encompassed about five different semiconductor busts (including the current downturn), the Van Eck Semiconductor ETF (SMH 0.54%) has nearly tripled the returns of the broader market — and this is after the crash in the sector this year. One would think investors would stick with a sector that has proven itself over the long term, and yet, so many traders still play the cycle. 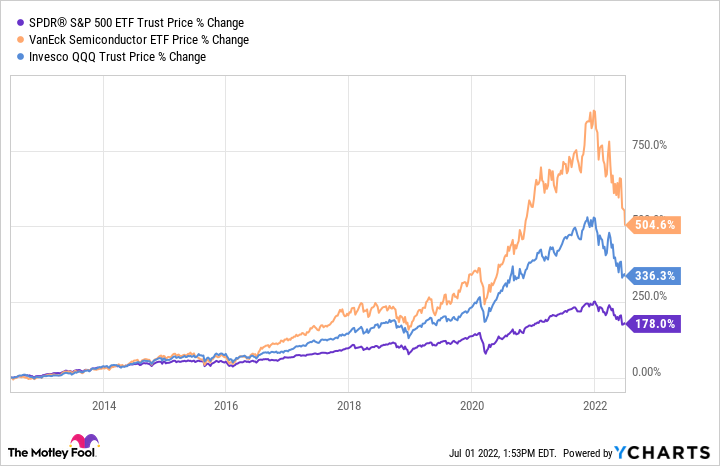 The reason for this outperformance is that the semiconductor industry is a long-term growth industry, and it will continue to be in the 2020s, even if we are about to have a soft year. Moreover, many chip companies still usually generate cash flow in downturns and repurchase a fair amount of stock when that happens.

One area that should grow even faster than the overall semi market, and which should outperform the sector this year, is automotive chips. Due to increasing chip content in cars, advanced driver-assisted systems (ADAS), electrification, and autonomy, the auto chip sector is forecast to grow in the low double digits annually through 2028, according to Market Research Future projections. Moreover, even though auto chips have been strong, they should remain resilient since there was a downturn in 2019 and another weak year in 2020 due to Covid lockdowns. So, there is still likely some catching up to do.

NXP Semiconductors has among the highest exposure to the auto sector, with about 50% of its revenues coming from auto chips. Another 22% comes from industrial and Internet of Things chips, which also appear to be in for a strong year as companies look to automate their factories and reduce labor costs. NXP makes a variety of auto chips, including advanced radar systems, electrification chips, zonal processors, and a variety of microcontrollers from the powertrain to comfort control. It also has a leadership position in a majority of the chips it sells to the auto industry.

If that’s not enough to convince you, it was recently reported that Korean chip giant Samsung wants to acquire NXP or at least another auto chip maker. When one of the largest chip-related conglomerates in the world is specifically targeting auto and industrial chips, it’s probably a good sign for the long-term growth of the sub-sector. Trading at just 10.5 this year’s earnings estimates, NXP looks awfully attractive at these levels

Catch this cyclical tech stock while the downswing lasts

Anders Bylund (Universal Display): Cyclical stocks can be beautiful. The trick is to identify the cyclical pattern, buy some shares on the downswing, and hold on for dear life across the inevitable bumps in the road.

Digital display technologist Universal Display is a very cyclical stock, and the current downturn brought back share prices not seen since 2018. This may not be the exact bottom of the negative market action, but Universal Display stands in a potentially profitable position right now. 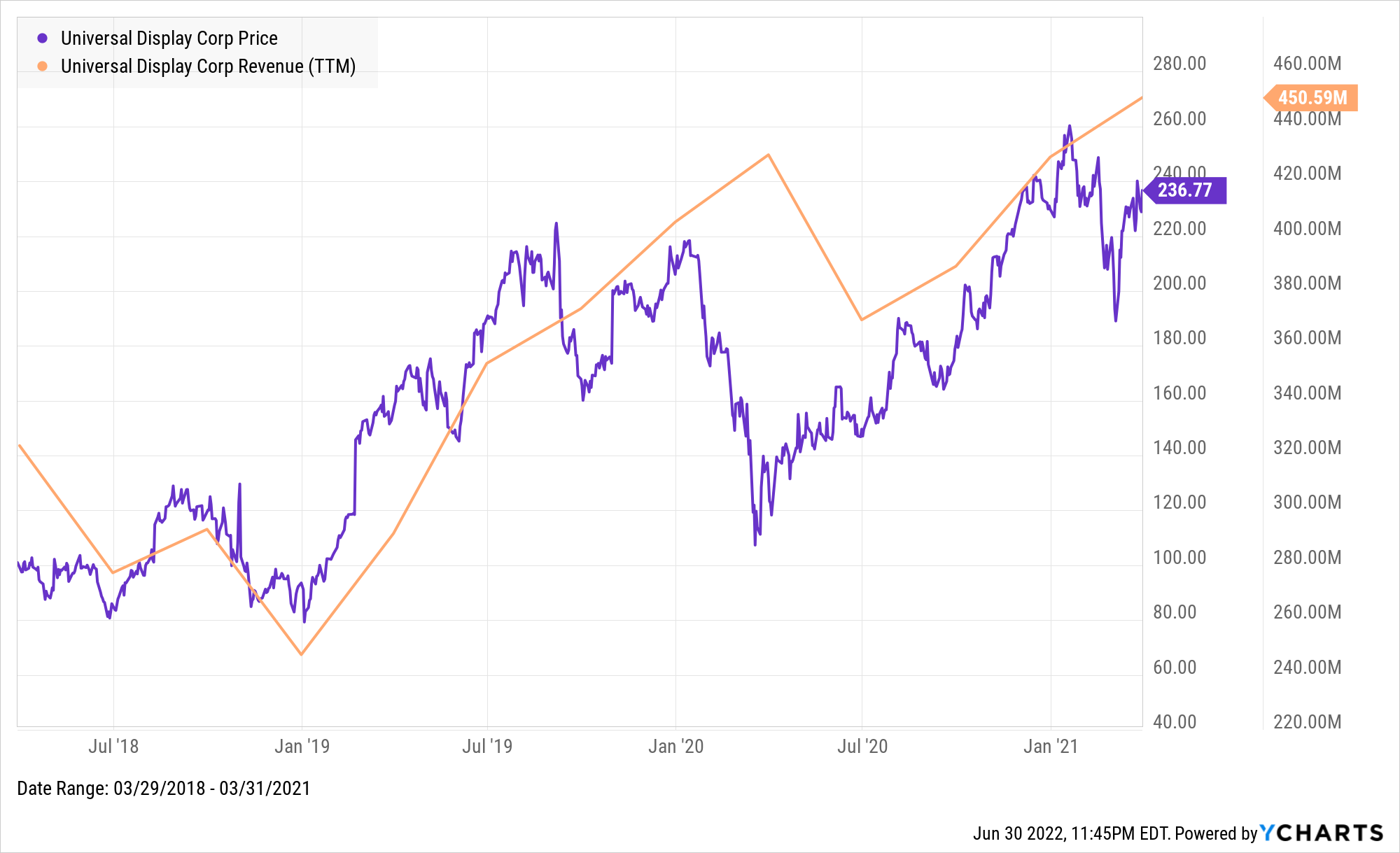 However, that pattern broke down in 2021. Universal Display kept delivering stronger and stronger top-line results, but share prices fell dramatically anyhow. Trailing sales are up by 27% year over year, but the stock is trading 55% lower.

As the market grows — even in an era of constrained consumer spending and global manufacturing slowdowns — Universal Display is also bringing new products to market that promise to expand its revenue take per square inch of OLED screen productions. The company’s business prospects are as healthy as ever, and you get to pick up shares at a massive discount. On top of all that, Universal Display’s formerly forgettable dividend policy is nothing to laugh at anymore, offering a healthy 1.1% yield and an unbroken history of annual payout boosts since 2018.

That’s why I’m still on the sidelines of AMD and Nvidia’s overheated stock charts, preferring to own Universal Display’s healthy combination of stellar growth, modest prices, and robust dividends. This mid-cap growth stock is simply a great buy right now.

Travel Agent Near Me